California’s Proposition 46 was soundly defeated on Nov. 4 with 67 percent of the roughly five million votes cast against. California was the trailblazer in what is now known as ‘Tort Reform’ when its Medical Injury Compensation Reform Act (MICRA) was passed in the mid-1970s in the midst of a medical malpractice insurance premium crisis.  MICRA’s key provision was to impose a $250,000 cap on non-economic damages.  That cap has remained in place ever since.

Presented for your consideration are some facts about the measure, the insurance industry and California’s caps as compared to those in other states: 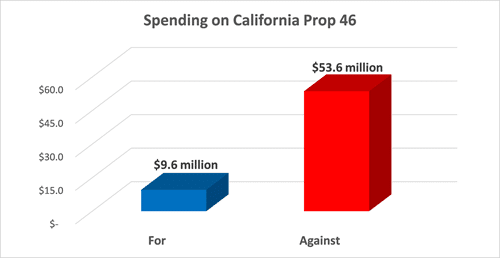 The majority was donated by attorney PACs and law firms.  Major donors included:

The majority was donated by the Medical Malpractice Insurance industry.  Major donors included:

Medical Malpractice insurance has been among the most profitable types of coverage as compared to other lines of property/casualty insurance for the past several years.[3] 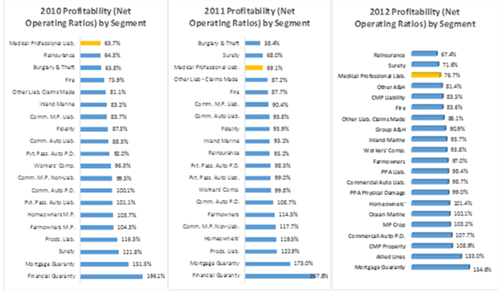 Note:  The lower the percentage listed, the greater the profitability.  Notice that the mortgage and financial guaranty segments remain the most unprofitable given the recent housing crisis leading to significant insurance claims.

California is the fourth most expensive state to live in according to a recent CNBC study.[5]  By contrast, the non-economic damage caps initiated by MICRA in 1975 are the lowest of any in the U.S.  While caps and specific rules regarding their application vary by state, the vast majority of states that have instituted such caps, are greater than the $250,000 cap currently in place in California.  It might surprise many Californians to know that the maximum non-economic damage awards mandated by statute are more than $700,000 in places like Tennessee, Wisconsin and Maryland and $500,000 in states like Mississippi, Florida, North Carolina and the Dakotas.

Several states which legislated non-economic damage caps such as Illinois, Georgia and Missouri had those laws overturned in 2010 as they were deemed unconstitutional by high courts in those states.

Our Physician Medical Directors know what it takes to build a strong case. Our medical expert witnesses leave no doubt. And our case managers streamline billing and logistics every step of the way, letting you focus on what you do best: constructing your winning case. Explore why AMFS clients expect more from their medical expert witnesses—and get it.

29
Years in
Business
Trust the nation’s most comprehensive medical expert witness network, cultivated over three decades in business.
212+
Medical
Specialties
With AMFS, there’s no medical specialty too rare and no case too tough. Experience expertise in action.